skip to main | skip to sidebar

I sometimes wonder what this blog has cost me and what it has saved me in Therapy. Last night I spoke with Uncle Doc (last survivor of Drama Mama's extended family that I knew). She had "pissed him off" which had led to him not wanting anything to do with the Church and not returning my phone calls. I had written him off, but decided I just had to have some answers to questions, so I called and left a voicemail. He has really made a good effort to get back to me and claims he wants to stay in touch, which is deadening my feelings of loss. Here's a picture of me with my Drama Mama. 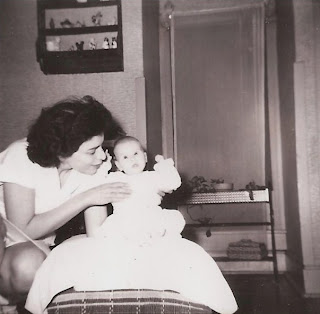 We did talk last night and he answered my questions. He said that Penny was the "best woman my Mom ever knew." Right away, without hearing my further questions about their sexuality. He said it was possible that they were lesbians or had a romantic relationship, but he didn't know. He confirmed that Drama Mama left the homelands for the big city a couple states away because Penny had a job there and "invited" Drama Mama to come out to live in the same city. Here's a picture of me with my "Aunt Penny." 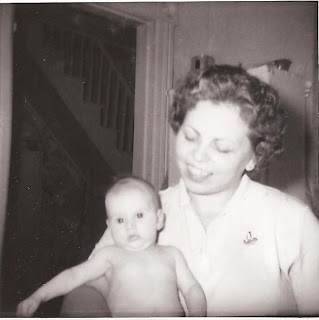 Like me, he remembers that there was some sort of falling out between Drama Mama and Penny, but doesn't know what it was about. I don't remember us living with Penny ever, but we all spent a lot of time together. I also remember her giving a speech to Penny which was an it's a time for you to move on speech why don't you marry our friend the beatnik (which she did).

He helped identify a couple personalities for me,and, I love his TMI moments, confessed that all had been drinking too much and he woke up one morning in bed with my biological father's former girlfriend (before Drama Mama)without knowing what had happened between them or if anything had happened at all. Any way Bio Dad's former girlfriend also appears to be a big part of my life as a baby and toddler as her name is also all over my baby book.

Finally, his memory was that Drama Mama got kicked out of nursing school (a residential program) because the Nuns thought she was a bad influence on the other women in the program. He said she was running with a very bad and well known group of "rough" people. He also confirmed that his older brother was routinely calling the school and asking, "Is this the Catholic whore house?"
Posted by Quiet Song at 10:19 AM

Quiet Song
I'm a faithful fiftyish member of the LDS church who has been attracted to both sexes.